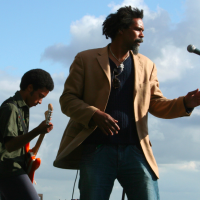 María Peralta is a choreographer and performer. She began her dance studies at the Dance Institute of the University of Caracas (IUDANZA) in 2004. In 2010 Peralta moved to Amsterdam where she finished her choreography studies at the School for New Dance Development (SNDO). Her graduation piece HIP HOP (2014) was selected for the International Theater School festival (ITs festival). Apart from creating her own pieces, she has performed in projects created by various choreographers, including Benoît Lachambre, Mĺrten Spĺngberg, Ann Liv Young and Hisako Horikawa. Next to this Peralta has participated in workshops by David Zambrano, Kirstie Simson, Maria Hassabi, Jeremy Wade, Robert Steijn, Jeanine Durning, Krőőt Juurak, Jeroen Fabius, Bojana Cveji? and Jan Ritsema. In 2012 Peralta received the danceWEB Scholarship at ImPulsTanz festival in Vienna.

During her residency María Peralta performed in The Performance Formerly Known as Performance or Camouflaging Kelly by Lisa Vereertbrugghen that premiered at Het Veem Theater in November 2014.